Love the Sublab, but i have an issue I’m not sure is a bug.

When I play the note C, doesn’t matter the octave, the Xsub doesn’t behave the way I expect it. It jumps up (not sure whether it’s an octave) so that the sub is not beneath the synth. Doesn’t matter what octave I play C in - the sub generates the same tone.
This behavior does not happen when I’m generating a sub using a sin in any other synth.

What we could do is put a button that disables this quantization of notes to the sub-range.

Above, did you actually mean a semitone, as opposed to an octave?

@perpetual3 asked me to mirror these two posts I made on KVR. Here’s the first; second to follow:

In the large (~5Mb) GIF screencap below, I have Reaper (Win10) playing D2 and C2 into Sublab with only the X-Sub volume turned up. Note the relationship between the Reaper MIDI note, what the X-Sub “keyboard” indicates, and the frequency of the 1st harmonic as shown in Voxengo SPAN. Should be easy for anyone to duplicate and test themselves.

It seems that the X-sub can only produce frequencies from C2 down to C#1. (And it seems it cycles through this octave regardless of the MIDI octave being played.)

I haven’t tested what the lowest note is that the Synth can produce, but one effect for me is that the sub can be either at the same octave as the Synth for a given MIDI note, or actually above it.

Thanks @perpetual3. This is an interesting design issue, both for sound and the Sublab plug. What I find a bit disconcerting is that when I’m playing E1, both the Synth and X-sub are playing that pitch, yet the X-sub “keyboard” suggests it’s playing E0. I’d assume that a “sub bass” would actually be playing below the bass, likely an octave below, as plugs like Lowender, bx_subsynth and Submarine interpret it. But perhaps that’s not the style here.

Thanks for having a look

. I think there are two things at play here.

Firstly, internally we’re using midi to frequency calculation which gives for midi note 36 the frequency 65.406395. This might be causing a bit of confusion as described in the link below, I’ll need to check Reaper, but it could be that C2 in Reaper is C1 in Ableton.
https://forum.ableton.com/viewtopic.php?f=1&t=148636 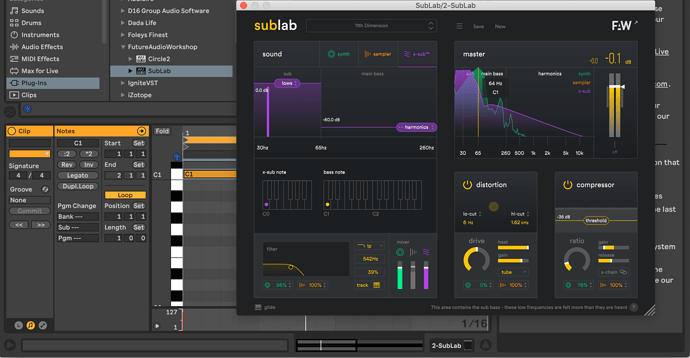 The second point is about the note quantization. Originally, we went from (Reaper) C1 to B1 in xSub, which as an engineer makes logical sense, but then based on feedback during sound-design, it was suggested to instead used the C#1 to C2, based on the behavior when doing popular glides in hip hop and trap. I’m totally down for adding a setting of the range, which has already been suggested by someone via support.

Thanks for your kind response. Yes, out of the box Reaper’s idea of diapason is A4 instead of A3, so adjusting that in Reaper would straighten out the divergence between what Reaper’s sending, and what I might eventually see in SPAN.

Without doing that though, I see that playing C#1 in Reaper gives C#0 in X-sub, then setting the Synth to +1oct will give C#1 there, or the octave spread I was looking for.

This weekend it became clear that thinking in terms of “building up from” X-sub is the way to go. If you bring the usual sub-synth thinking of something “down an octave from” the bass line, you can paint yourself into a corner.

Unrelatedly, I noticed that the rightmost node of the Synth’s Pitch Envelope displays a vertically oriented two-headed arrow that seems non-functional.

Thanks again for your help!

Honestly, I’d never want a sub note below E0 or maybe D#0, because D0, C#0, and C0 are too low for most club/festival sub arrays (or home/studio speakers with dedicated subwoofers) to generate with the same overall power as E0 and higher.

The X-Sub approach does better than most simple “sub” features in other synths, because the harmonics it’s adding in can help to provide a perception of the fundamental that doesn’t push as much air down in the sub region.

So that’s my way of saying I’m glad that X-Sub’s current lower limit is C#0 and not C0, and that I’ll be glad when you introduce a user-configurable range for the wrap-around behavior.