Is there any way to organize the preset banks? It seems that when I create a preset, it assigns it a random bank and number within the bank, which makes it really tough to switch presets using midi. Is there any way to change this? Hopefully there’s just something I’ve overlooked.

What happens is that when you save a preset it gets put into the bank that is selected on the “save as” window.

There are a couple of things that could be improved here, @Hugh_FAW and myself were discussing them a couple of days ago, one thing is that we default to “User”. At the moment “My Sounds” is only a tag in the browser that you need to set youself, but if this tag automatically showed all sounds that are outside of the factory bank, i think it would really help.

On the bank number for the “User” preset folders, the way it works at the moment is that the order in which they are listed in the browser, determines the bank change number. Can you confirm that this is what you are referring to and that it is working correctly? You can see the bank number on the right hand side of the sound panel, denoted “PC”

I understand the part about folders, and the presets are based on the order they are displayed in the browser (alphabetically). However, there really needs to be a way to edit bank/program numbers directly. For example, I just took a look at the “My Sounds” folder (default for custom sounds) and the presets I have saved are in a variety of banks, based on alphabetical order. It’s kind of a ridiculous way to store these presets, and preventing the user from ordering or customizing these values makes it even harder to control. Even worse, saving other presets changes the numbers of presets that come after them, messing up any saved midi changes already programmed into the song.

I would like to do something like this. Have a set of sounds that work for a song, and organize them in the order in which they will be used in the song. Then, I can simply use a pedal to increment the midi value for program to trigger a program change rather than having to remember the program number and enter it in manually. Other synths such as Zebra allow for this, and I would love for Circle to gain this ability well, whether it’s through a custom list of presets per song or being able to change numbers of presets to organize them permanently.

I agree with you @ajax that would be a great way to organize presets.

Going to have a look at this next. I think one thing that would be useful for a start is to add the folders to the top browser. I’ve open up a ticket for this. The bank number should definitely be from the folder it is save into, at the moment if you “save as” a preset into “My Sounds” it retains the bank change number from the original preset.

Just did a first pass on adding a “Banks” section to the quick browser. Super useful, especially as we release more banks. I also feel that confusion was being caused by the tag named “my sounds” and also having a default empty bank named “My Sounds”. These are unrelated, “my sounds” tag is simply a tag you can assign to any preset, in reality, it is more a “favorite” tag. Going to change the name of that to “favorite” and add the ability to tag any preset simply by clicking a “*” in the list. Then “My Sounds” is actually a folder, which will now appear alongside the other folder banks as a tag, like “Factory” etc.

Definitely was in need of a clean up and hope these changes help clarify the browser.

Thanks for the update Gavin, this is defintely a good starting point to clean up the browser. I appreciate so much the tag feature but as you said a better organization of tags is absolutely needed.

@Residente, did a first past, we have added banks to the top browser. You can also see the start of favorites being added with the change to the tag from “my sounds” to “favorites”.
Also want to add an import button for banks, at the moment you have to navigate to Circle’s install folder and drop them in manually. Think all these combined should go a long way to improving the browser experience so everyone can find their sounds faster. 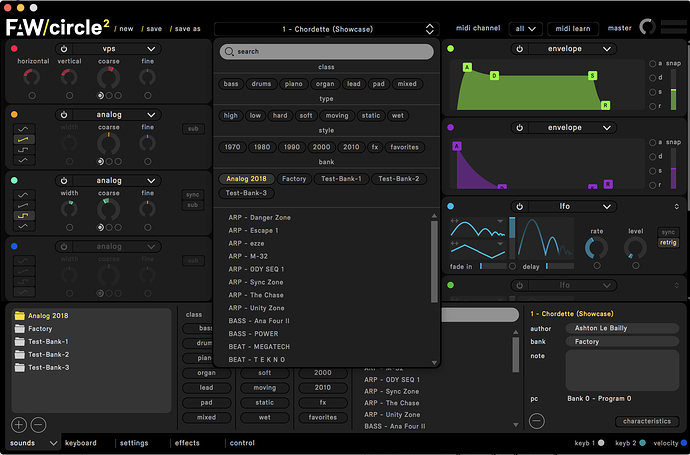 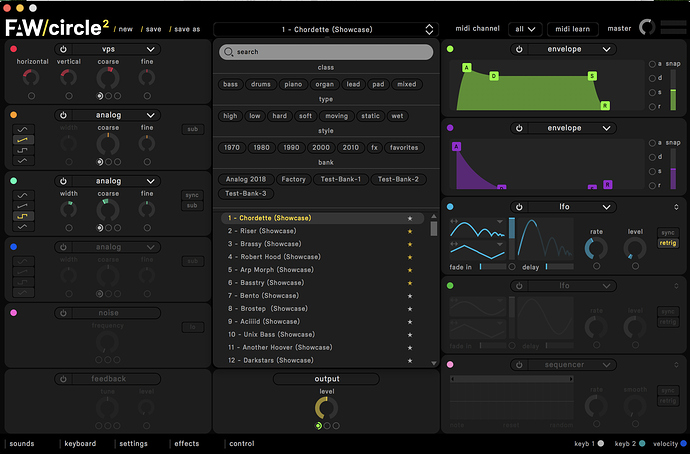 Have also added the favorites functionality, handy as you can now easily tag presets that you like with a “*” and then filter by “favorites” tag if you want…

@Gavin_FAW
Hi there, the last update is a very big improvement for the browser, now it’s very clear, and find a preset. is much faster. I tested it all over the week end, everything was pretty smooth.

Also, we released a new version of Circle 2.1.2, links are in the other thread.