Saved preset sounds completely different after updating to 2.1 in logic and mainstage

Hello everybody , new in this community, couple of years circle user.
I used some sound (created starting from presets ) that I saved using the internal preset management of Logic (latest version). I’m using them in a live performance with Mainstage (latest too)
After updating to 2.1 those sound loads the basic number 1 sound of library with a useless arrangement of every parameter and obviously it sounds completely different!
Anyone has the same issue?

Can you let me know the name of the preset?

Is there a reason you’re not using Circle2’s own preset system? This is usually the best way to save your Circle2 presets as it’s the most common use case we develop for.

If you need to rescue those sounds as an emergency, you could:

Thank u guys for your replies
Obviously I found a way to recover the most Important sounds that i’ve Created/ modified but one of the main comfortable ways to use plugins in logic is to open it and simply don’t care about saving anythjng but the whole project .
I use logic internal system because with one simple save is possible to save the complete track wit every plug insterted and exchange them between songs and for the use in MainStage .
I used the internal system to exchange those sound from the previous version buuuut after updating to the last update the “my sounds” folder is completely screwed up . I can still found my saved ones with the search option… the point is to remember the name!

Thanks for the patience on the preset front.

Can you describe in detail the problem with “My Sounds”?

We put all the original presets that we removed between 2.0 and 2.1 back into 2.1.1 and also tested that there were no duplicates. The main thing we want to avoid is any issues are “My Sounds”, obviously these are presets that would have been saved by the people designing their own sounds.

Hi Gavin, thank u
in the screenshot there is what I see in “my sounds” folder.
instead of those sound there was a simple selection of some sounds that I’ve created/modified and resaved.
they’re still reachable with the search function so with a little patience I can still use it in my live setup.
thank you. 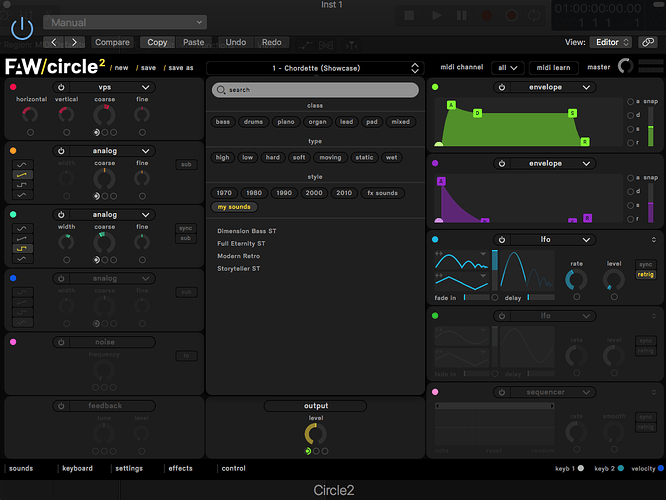