Sublab’s sampler shares a volume ADSR envelope with the main synth. Unfortunately, that ADSR does not function properly when applied to the sampler.

If you adjust the sustain and decay on the ADSR envelope, the sampler will inevitably glitch up, causing pops and crackles. Anything less than 100% sustain is likely to cause clicking when applied to the sampler. It is impossible to craft kicks with short decays from samples. This issue is especially awful with factory sample presets like “TR808-Kick-Attack-Basic”. 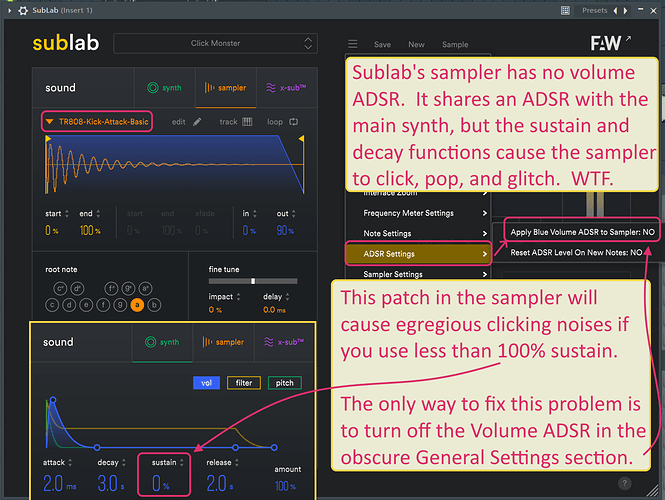 I just spent hours trying to resolve this issue. It turns out there is an obscure setting called “Apply Blue Volume ADSR to Sampler”. If you turn that off, the sampler will stop causing awful clicks and pops. Yet, with it turned off, there is NO feasible option to shape the decay volume of samples AT ALL.

This is a major fail for a synth that is supposed to make 808-style subs/kicks. For me, it’s nearly a deal breaker. It’s a sampler with no functional volume ADSR. How is that not a deal breaker? This is the one feature that every sampler really has to have. Especially when you are trying to craft 808 kicks with short decay times.

I make footwork, which uses short, snappy 808s that are played rapidly at 160 bpm. 808’s are played rapid fire in my genre, one after the other. I can’t use huge, fat 808s with 100% sustain. I usually use 0% sustain and a medium-short decay. But Sublab won’t let me. The inability to add a functional decay/sustain envelope to samples is really terrible. Perhaps I’m missing something, but I’m seriously considering asking for a refund.

Big fan of footwork, RP Boo for one

We have a windows/macOS beta version with a fix for the ADSR issue. I’ve pmed you the link, can you install and have a look…