I already purchased sublab XL and it was working fine until this error started happening about a week or two ago. Unfortunately while i was in the middle of three projects that I was using it on.

By the way, finally fixed my problem with logic not booting (unrelated) and was able to get Sublab XL to go passed the “launch” screen. That narrows it down to an Ableton thing. I also tried the .AU (figuring it worked in logic so…) but still hangs at the launch screen in Live.

@icongreen, can you share the fix in case other people run into it?

apologies if i was unclear in my reply.
I was having a problem with your app in albeton so I went to try it in Logic, unfortunately my copy of logic was not booting up. I thought it was possibly related to your software, but after doing Apples insanely long (and only) suggestion of removing all 200+ of my plugins and add them back “one at a time” booting up logic each time, and closing when it was able to boot up. Fortunately that world but the offending plugin was not yours. When launched sublab xl in Logic it did the same thing as it’s doing in Albeton which is get caught on the “launch” button after asking me to log in. So far it’s been a week and I’m not able to re-create a sound i was using in sublab anywhere else so I’m really stuck. Could you please help me get this resolved? After reading quite a few posts it seems like I’m not the only one with this issue

Gavin, my bad. I did get it to work after logic booted, however the projects I’m working on are on Ableton. I misspoke in my last email - just double checked. Still cannot get it to work in ableton.

Sounds like you’re getting stuck on the login screen, right? Could you try launching the standalone app and logging in there?

Let me know if that works or not!

Hi there. Sublab XL won’t activate when I put in my loggin… Any work arounds? 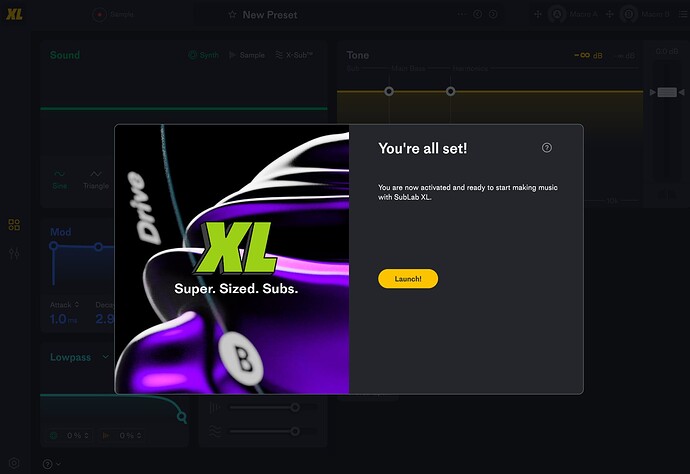 @DJLMNOP that looks like you have managed to activate ok, but SubLab XL hasn’t been able to create the unlocked file on disk.

What macOS are you running and have you tried the standalone version in /Applications/SubLabXL.app to activate?

I’m running the newest version of Ventura on both my computers and I’m having the same problem on both. Tried to run it stand alone and same problem. It just stuck on that screen and never goes into the plug in. It’s really annoying since I have it on multiple tracks I’m currently working on. Would love to get this solved soon!

Have you done anything strange like move folder around, run on the macOS on an external hard disk? Also can you make sure that you have version 1.0.2 by going to the app in /Application/SubLabXL.app and checking what the version is by right clicking on it you should see what is in the image below: 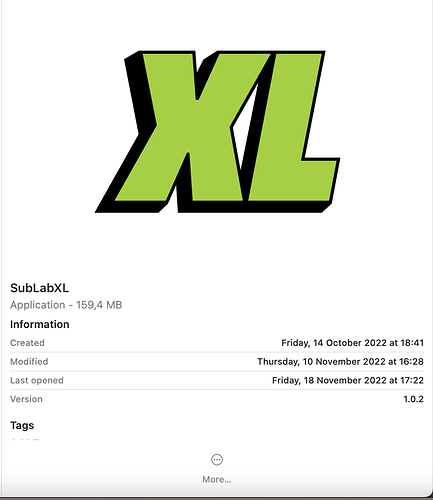