Post your bugs here guys. We’ll run over this list and either create a new bug post or else add you to the people reporting it. I’ve done a sample below to give the idea…

Circle is deactivating randomly every few launches. I can’t recreate it all the time/intermittent.

Circle standalone crashes when you close the application.

Some GUI glitches in the top and lower menu.

Could you post some screenshots for further clarification, please?

We’ve made some changes to the titlebar on Windows for the next beta version, but I don’t think this is related to your issue. 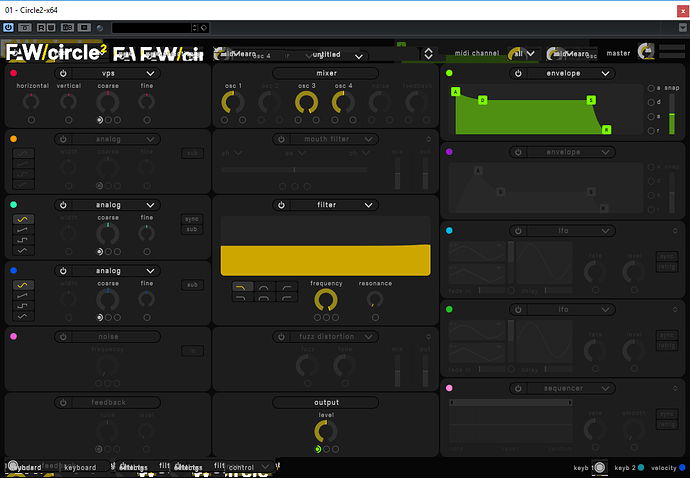 Thanks, will get that fixed up.

When I choose analog to OSC1 and choose square wave.

And then I choose an lfo to modulate the width of OSC1, then it works but every note play with a random amount of detune. Very strange, and I can’t correct it with LFO level to 0.

When I listen the phaser effect, the sound is very strange, it’s like there"s no stereo but a sort of mono effect.

When I launch another instance of Circle2, the detune doesn’t happen.

@Lyann, just sent you a PM. Thanks for reporting the bugs. I’m going to verify if I see them here also.

Same glitches in the GUI here.

thanks @twolegstoneworks, I’ve added you as a reporter under the associated bug thread…

Downloaded the setup file, installed, opened Circle 2 and it appears to be exactly the same as the previous version. Installed to subfolder (Circle Beta), created during the install, within my VST plugin folder and installed the Beta to that location and neither the subfolder or .dll for the beta are showing.

On further investigation, the file and subfolder did install but neither are showing in the plugin list in Live although they both show in Explorer. May be an issue with Comodo Firewall which decided to install in the sandbox. Will attempt install on my other PC tomorrow which does not have Comodo and see if the issue remains.

No issues with standalone.

Problem Activating on Windows 10. Says invalid Activation code on both PCs. None beta version working on both PCs also installed fine on my 2 macs. Gonna play with Tonight.