Hi, so after purchasing SubLab (and updating it to the latest version) for my Pro Tools rig (12.9.6), on Mac OS (Mojave 10.14.6) I reported issues and suggestions to Sublab. They steered me here and to talk to Gavin, but doesn’t look like there is anyway to PM him, so figured I’d start a thread.

And I will tell you this as a last note. If you guys took the time to do all this and executed it properly, professionals like me would gladly pay 3-4 times as much for such a plug. BUT the obvious attention to detail in all the suggestions and issues I brought up would need to be there. I really don’t need such a inexpensive plug, funny as it sounds. I’d rather pay more and get more Quality, R&D, Smooth Rock Solid Bug Free Operation and THOUGHT. Not more trendy features and “instant dope buttons”.

Iron out the basics first.

We’ve been working on an update and it is ready for testing. We’ve included a “Stop all playing notes” button. I’ll pm you the download links once they are uploaded.

I’ll park all the other points as I expect we’d end up with a big thread of back and fourth and be none the wiser after it all, as our starting view points are pretty far a part. Let’s get it going in Pro Tools the way you expect.

Thanks for the response Gavin ! Thats great to hear about a new update already. You guys are quick. Also to have already incorporated a panic button is sweeeeeeet !

I totally understand about backburner’ing my suggestions. The plugin running smoothly in PT comes first. I agree.

I’d definitely appreciate the beta update and give you all feedback once tested. Also tell me if there is anything you’d like me to specifically test/do that I might not do myself. I have backup OS clone drives too, so I can test on multiple Mac OS’s if need be. Just let me know. Otherwise, I will just use it like I’d use it, ya know and only in Mojave.

All good, lets try and get Pro Tools all worked out

I’ve just sent you a PM with the build. We’ve upgraded the AAX SDK version, so hopefully that will improve some of the issues. Without getting too far into it, usually it is recommended to stay on AAX 2.2.0, upgrading to 2.3.2 has some improvements but it also causes us to loose support for Pro Tools 10. Maybe now is the time to rip that band aid and support 11+ only.

The panic button is under the “note settings” sub-menu.

Thanks for the help!
Gavin. 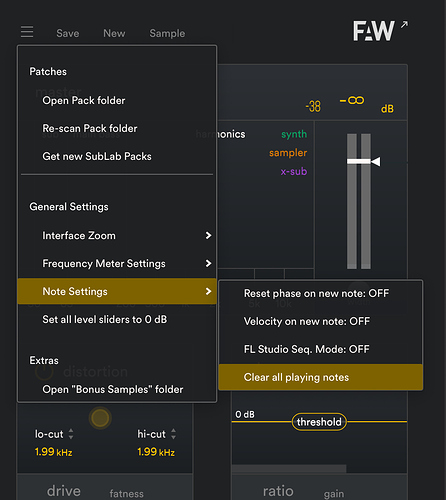 Thanks ! Let me download this and get it installed and get back to you. Sorry for the delay, had a busy last few days.

Yea, I totally understand that tug and pull about upgrading. You gain, and lose, always. But you got the right attitude man, as its just best to move forward and bite the bullet on them things you lose. (usually). lol At the same time, there is always a sweet spot in timing to do so. Don’t wanna move too fast, or too slow.

Yeah, its definitely tricky, but I think most people have moved on from Pro Tools 10 and hopefully the newer SDK works better that 2.2.0 does. Let me know how the testing goes, we’re working away here on some other stuff, so no rush.

Ok, finally did some testing. Sorry for the delay, just super swamped lately.

1 - Crashing to a point of PT freezing never happened (so far). So that seems fixed.

2 - During normal patient usage, Errors are a lot less ! So that’s cool. But they still exist here and there. 9173 is the most common with the occasional 6101. That said if I want to try to make a error pop up, I can by playing a midi track pattern and quickly scrolling through presets. (but this is kinda normal usage pending on who you are).

3 - Hanging notes. Still happen when playing midi tracks and stopping in certain places. Where you put the Notes off thing is pretty inconvenient to get too fast. When these things happen, you need to kill all notes very fast before over swelling of the sound can sometimes get so bad damage to speakers can occur. This is why most companies got a button with a shorter name right on the front panel somewhere easy to quickly access. Usually called “Panic Button” That said, a quicker solution that works 85% of the time is to play the same note again and stop it then goes away.

4 - When launching the plugin, the default preset is “11th Dimension”. Upon launch this sound is NEVER audible. It’s confusing until you realize its a bug. Switching to any other preset, then going back to 11th Dimension will then cause the preset to be audible.

5 - I still get no response when switching octaves when on most presets. And for the most part I feel a couple settings (A of the ADSR and Harmonies sliders thing) just have so little effect over the sound.

6 - This isn’t a bug, but borderline makes the experience of using Sublab feel like it is - But The octave placement is so high on this plugin. It doesn’t match any other plugin I’ve used. To me it needs to trigger about 4 octaves lower. Every sound sounds like a whistle when using the normal area. If I have a midi pattern made for lets say XPand, or some other SubBass plugin and I want to change the sound out for SubLab, Jesus, all I hear is whistling until I move my midi notes 4 octaves down. (which I why more easily I want to use the Oct adjustment on Sublab, but like #5 says, it barely works

7 - One of the most important issues now. Where is the modes like all samplers have that let you adjust previous note cancel or not ? In samplers its called Mono/Poly. This is where it tells the next note to cancel the previous note so no drum overlapping happens. VERY important. That would be “mono note” mode. “Poly Note” mode will allow the entire first note to play out to its end regardless of what’s pressed next. These settings should not be global, but rather PER SOUND. Cause some you do want to overlap, others you do not.

o response when switching octaves when on most presets. And for the most part I feel a couple settings (A of the ADSR and Harmonies sliders thing) just have so little effect over the sound.

6 - This isn’t a bug, but borderline makes the experience of using Sublab feel like it is -

On point 6, if you go into the top menu and select “FL Studio Seq Mode” it will shift SubLab down 3 octaves automatically.

Ahhhh, lol so that’s what “FL Studio Seq Mode” is. Its really just “3 Oct Dwn Mode”. lol - Thanks for the info ! Got it. This is good news. To me, that should just be default, as I’m on PT and (FYI) everything I’ve used so far matches that better. Ease of use should be trying to match other plugins and keyboards octave ranges so when swapping plugins, but leaving the midi track its relatively more close to each other.

Maybe its just me though ? IDK ? You could swap it for default and put the current default as the optional setting (with a different name of course), maybe something more universal and descriptive like “3 Oct Up Mode”. You could maybe try to take a vote on that so we could see indeed if its just me and FL users ? IDK ?

I agree about it being on by default. Thing is when testing some people were fine with the presets being centered towards the bass octave. It was only when we started getting some presets in from FL Studio sound designers that we noticed they we all shifting the oscillators up 3 octaves to overcome the way SubLab is centered.

Thing is that once the plugin in released, we can’t changed any setting that would make peoples projects sound different. Hence why we didn’t make it a default setting. What we can do though is label it a bit better in the menu. I think in general we need to improve the help and as you say have a user manual. We kind of though that people don’t read manuals anymore and mostly use online help and videos, but maybe this isn’t the case.

Ahhh, yes for sure I didn’t think of that. Can’t switch it up now. As peoples previous and current projects would no longer be in the same octave and they’d have to move their midi info. That being said, most to all industry professionals turn it to audio by tracking out their VI’s when they are sure that’s the way they want the sound. So I’m not sure it would be that huge of a problem except for those that keep things midi triggering their whole life which is seriously not recommended practice.

My point is, is I think we would all live just fine if you changed the default. Those that complain will just have learned the lesson I’ve learnt years ago. lol Things change, so commit to real audio. Pretty easy fix to it as well is to get the octave changer to work better, then all any of us have to do is change the octave to what fits our midi. Maybe get a global octave setting along with a per sound octave setting. And have them both work really flawless = problems solved.

About manuals. LOL, Yes you are right. I’m sure few people read manuals now a days. Me included. But when you have to, you have to. And you usually have to if the videos on them aren’t explanatory enough. The video needs to be like a manual. Directly cover every setting, every function, every possibility, etc… Sometimes people can’t accomplish this, so then I will look for the manual or anything to answer my question. Online help… ehh, takes longer, I’d rather read a manual IF the manual is set up and indexed properly.

Honestly, sometimes it takes longer to find what you need in a video cause videos can not be indexed like manuals. Then its like you gotta watch the whole video, only to find out what you wanted to know is on part 2 !! haha - If a manual is done properly, you can get straight to your question pretty fast opposed to combing through hours of internet BS.